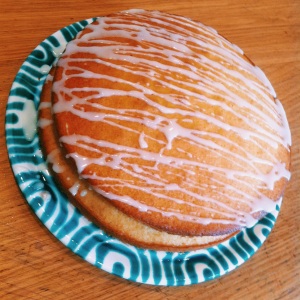 Upon my return from the beautiful Italian island of Sicily, I promised I would experiment with baking some Sicilian treats that I could share with you all.

Cassata is a traditional Sicilian cake and can be found everywhere on the island, from cafés to pasticcerias to restaurant dessert cabinets. It is traditionally a sponge cake, moistened with fruit juice or liqueur and filled with this cake’s namesake – ‘cassata’, which is a mixture of sweetened ricotta cheese, mixed peel and chocolate (it can be flavoured with vanilla also); and decorated with a layer of marzipan and icing, usually in pastel colours.

As you can see from the picture above, mine is far from traditional in the icing stakes! But it’s creamy ricotta filling and fruity flavour echoes its more authentic Sicilian cousin.

My inspiration came from Dan Lepard’s glorious tome, ‘Short and Sweet’. Indeed I followed his sponge recipe entirely, only deviating when it came to the filling, to which I added marmalade rather than mixed peel; and moistening the cake. He describes this as the ‘Sophia Loren’ of cakes, which I can only imagine denotes its elegance and refined and delicate flavour as well as its Italian roots. I hope you enjoy making this wonderful cake…

For the Cassata Filling:

To make the cake:

To make the filling:

To make the icing:

I hope this cake will give you all a taste of Sicily and maybe even inspire you to visit the island one day! It is truly a charming and captivating place. Don’t forget to let me know how you got on 🙂 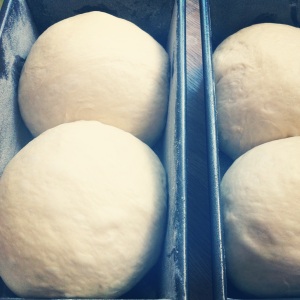 The idea for this post was inspired by two pages in Richard Bertinet’s ‘Dough’. The two pictures (found on pages 18 & 19 of the book), juxtaposed, look fairly similar bar the uniform pappiness of the supermarket ‘sliced-white’, and need no further explanation besides two lists of ingredients. One contains four natural constituents: anyone who has made bread at home will know these are flour, yeast, salt and water; the other looks like the contents of a chemist’s cabinet: mono- and diacetyle tartaric acid esters of mono- and diglycerides of fatty acids, to name just one of the many ‘E-numbers’ it comprises.

As well as arousing a glimmer of a self-satisfied smirk as I considered which home-baked, Bertinet influenced loaf I would conjure first; I was also driven to find out more about why these Frankenstein loaves have long been Britain’s favourite – accounting for over a quarter (£920 Million) of the UK baked-goods market, in 2012.

Well, we can blame the ‘bread-scientists’ at the Chorley Wood Flour Milling and Bakery Research Association Laboratories (doesn’t sound like a place I would want to be responsible for something I eat every day!), the work of whom, back in 1961, led to a revolutionary new way of producing bread – The Chorleywood Process. This process uses double the amount of yeast found in a homemade loaf. The higher yeast content, coupled with adding hard fats to stabilise the structure of the dough, (oh, and a plethora of chemicals!) then mixing at high speed produces a dough which is ready to bake in just 3 and a half hours. This short production time meant British bread could be mass-produced and, as a result, Britain is now one of the cheapest places in the world to buy bread.

As well as being chock-a-block with additives and preservatives, Chorleywood bread, (if you can call it bread?) has also been blamed for the increase of people who find bread difficult to digest. Furthermore, the average supermarket loaf is likely to have been deep-frozen and defrosted prior to it reaching your kitchen table; and will no doubt have been made using flour from a variety of far-flung locations across the globe, including Russia, Canada and France.

But who wants bread with a texture like cotton-wool and, quite frankly, as much flavour too? Certainly not me! And I’m not alone. Artisan bread is staging a huge renaissance with sales of luxury and speciality breads rising steadily year on year (according to Waitrose), which are made in comparatively miniscule batches and produced using traditional methods.

According to ‘Paul Hollywood’, the lengthier the proving process, the tastier the loaf. This explains the lack of any character in packaged supermarket bread and the whole world of flavour to be experienced in home-baked and artisan loaves. Not to mention the huge joy and satisfaction of mixing, kneading and shaping your own dough and seeing it rise and bloom in the oven! Priceless!

SO GET BAKING EVERYONE! X

For more on Supermarket vs. Artisan bread see the following articles: 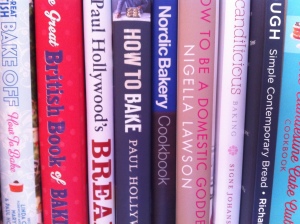 I have already hinted at my uncontrollable cookbook-buying habit. The delivery man from Amazon can actually be heard saying “you again!” as I open the door, hand eagerly outstretched ready to snatch at the plastic toothpick; scrawling my name whilst simultaneously tearing the package to shreds to reveal my new purchase.

I’ve bought some cracking new baking books recently. ‘How to Bake’ by the Silver Fox himself, Paul Hollywood is a winner for me. I love the layout of this book. The preamble to each chapter is absorbing and I appreciate the fact he includes the little details which make all the difference, like the number of loaves, preparation and baking time clearly at the top of each recipe. Some argue that this is a book for the amateur baker, but I disagree. For me, there can never be too many hints and tips about baking, even if they do concern the basics like how to knead and prove your dough. All bakers have a slightly different slant on how to conduct these elemental tasks. Therefore I collect hints and tips just as I collect the recipes themselves. They change the fabric of my baking experience; as I test out the ones I like the sound of, discarding those which bring nothing to my endeavor and incorporating the morsels which will enhance the taste and beauty of my future bakes.

Another book I am wholly impressed with is ‘Nordic Bakery’ by Miisa Mink. Now this may not appeal to the more mainstream bakers among you, as this is, as the title suggests, a collection of traditional (mainly Finnish) Nordic recipes. I won’t go too far into why I have a fervent interest in the baking of our Northern European friends (see future posts…), but I was specifically looking for traditional Finnish recipes which I could practice and replicate in order to evoke many a happy memory of the country. This book certainly delivers. It contains recipes for many of the traditional treats you see in cafes and homes all over Finland. My mother-in-law (who is Finnish), even commented that her Mummo (grandmother) used to bake many of the recipes for her when she was a child. I have tried the Karelian Pies, Potato Flatbreads and the Date Cake and all are out of this world! A definite must-have for anyone wanting  to discover more about Nordic baking or indeed anyone who enjoys delicious baked goodies!

When I first started baking, in my naivety, I believed that when you buy a new book and follow one of the, often beautifully presented and well laid out, recipes therein, the fruits of your labour will necessarily match up to the mouth-watering picture nestled attractively beside it. Surely any recipe which boasts a product, the following of which (without tampering) it will never produce is an issue for Trading Standards? After all, if I knew beforehand that the recipes in a given book were almost without exception full of errors, typos and untested claims; there isn’t a yeast-spore’s chance in a bag of salt that I would give up my hard earned cash in exchange for it! My veil of ignorance has since been lifted! Let’s start with Nigella Lawson’s ‘How to be a Domestic Goddess’. Now it is, among other things, Nigella’s gift of the gab which most entices me to buy each new book she releases; but after ‘How to Eat’, I have also come to expect well tested, trustworthy recipes. Certainly not in this case! This book is full of unforgivable typos (whoever added 1 tablespoon of salt to a 500g loaf?) which will sadly lead to the unsuspecting baker wasting good ingredients and suffering unpalatable results. I will red-flag more books which are the audacious ambassadors of untested recipes soon (see future posts).

In the meantime, my advice to anyone afflicted with this cookbook obsession is twofold:

1) Read the reviews before you buy! If there are shameless errors in a book, the brigade of trusty reviewers are sure to tell us! And become a reviewer yourself – the more of us who air our opinions, the more rounded a picture we will be privy to when we put our buyers hat on – and hence the better value for money we will receive!

2) If your pockets aren’t as deep as Mary Poppins’ bag, steer clear of Amazon’s ‘One-Click’ feature! Should you have the misfortune to be as bedeviled as I am by the baking-book-bug you will surely bankrupt yourself within a year!